Our hunting dogs have definitely earned the right to be called man’s best friend. They’re loyal, hardworking and, as long as you throw them a treat every now and then, they never complain. And gun dogs are great when it comes down to hunting like a pro. But the biggest question remains… HOW do I hunt with a gun dog?

Not only can they help identify the whereabouts of game, they can also flush it out and, finally, retrieve your downed shots.

Getting started in the world of gun dogs, though, can be tricky for a beginner, so I’m going to run through some of the basics to get you started. 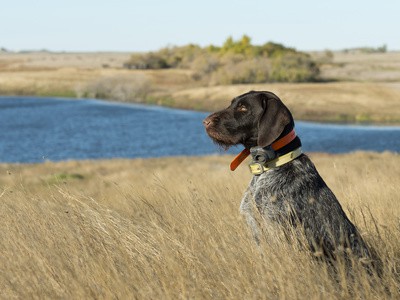 Which Puppy Do You Choose?

The best way to get started is with a puppy. You don’t want to go for an older dog – even if it’s got hunting experience – as they’re going to be harder to train.

But where do you start?

Well, many breeders specifically breed gun dogs whose parents had the correct traits to make them into the perfect hunting dog. Heading straight to one of these breeders gives you an immediate head start.

What happens, though, when you get there and you’re confronted with a litter of almost identical puppies? How do you choose?!

There’s certain things that you need to look for and I’m going to go through these now.

First off, judge the size of the puppies against each other. You don’t want a puppy that’s too small as it’s likely they’ll be weaker when they’re fully grown. On the flip side, you don’t want one that’s noticeably bigger than the rest as they might end up slow and chubby as an adult. Instead, look for one that’s not too lean and not too bulky.

The next thing you need to identify is how confident they are. It’s easy to work out how confident they are as they’ll come towards you and make eye contact straight away. You need this type of character to be present in them as it demonstrates that they’ve got a curious nature and not hesitant to hold back.

Finally, it’s likely that, when you’re out hunting, there’s going to be other dogs present too. Therefore, you need to watch how they interact with other puppies. You don’t want one that’s constantly fighting with the other pups – this is way too disruptive out in the field. Also, you don’t want one that’s shy with the other pups as they’ll need to work with other dogs out on the hunt.

The Making of a Skillful Hunting Gun Dog

No matter what the puppy’s heritage is you’re going to have to take them through a sometimes painstaking training process.

The best place to start is with the old favorites that any dog – hunting or otherwise – should be taught and that’s the basics of “Sit!” and “Stay!”

All you need is a hidden treat that you can use to reinforce the behavior that you require.

Once you’ve got these foundations of learning in place then you can start moving onto the specialist skills required for a gun dog e.g. pointing, setting, flushing and retrieving.

Now, it may be worth your while looking for a gun dog training school in your local area. These are run by expert handlers who know exactly how to get your dog up to scratch. They also know the best locations to go and train your dog in preparation for the real world of hunting.

My final tip is to make sure that you choose the right leash as it’s an important part of controlling your dog.

You know, dogs can get over excited when they’re out hunting and their natural instincts are hard to resist sometimes.

It might seem unfair to restrict a dog’s freedom, but you have to remember that when they’re out hunting they’re working dogs and you need to be strict.

The best way to reinforce this is with a relatively short leash. Now, the leash I use for a my dog on a daily walk allows him to go about 10 feet out, this gives them the freedom to run around a bit, but not get too far.

However, with a hunting dog I never go longer than a shorter 3 foot lead. This is because, when they need to be on the leash, I need to be able to see them at all times. A longer leash opens up the opportunity for them to stray from my heel and disappear into a bush!

And, of course, the longer the leash, the more chance there is of it getting caught up and knotted. The last thing you want to be doing is trying to unknot a tangled leash and calm a frustrated dog down at the same time!

I hope you’ve enjoyed this tutorial on getting started with gun dogs, so let me know what you thought in the comments!