A day spent pheasant hunting is truly one of hunting’s simplest pleasures, but it’s still easy to make mistakes.

So, if you want to know how to hunt pheasants properly, you need to make sure you’re on top of your game.

So what are some pheasant hunting tips?

I’m going to take you through some of the biggest mistakes made out in the field. And, believe me, even veteran hunters still make some of these!

You can get pretty hyped up when hunting pheasants, but you need to keep your cool and stop rushing!

It’s impossible to move through cover quietly if you’re stampeding away at 50mph, so reduce your speed to a slow walking pace.

And if you’re hunting with a dog then, please, keep it on a lead! Dogs are even more likely to lose their cool than you when their instincts kick in. The last thing you want is all you hard work ruined by a galloping canine!

The sight of a pheasant flying through the air gives you an exhilarating rush and gets that old trigger finger itching like there’s no tomorrow.

But you can’t just start unloading both barrels immediately!

If you shoot when the pheasant is too close then you’ll just blow it to smithereens. And you won’t have anything left to make that delicious game pie with afterwards!

Depending on your skill level you’re going to want to let rip when the pheasant is between 20 – 45 yards away.

Not Mounting the Gun Properly

Due to the agile nature of pheasants many hunters worry that their target is going to get away before they can take a shot.

As a result, mounting the gun properly tends to go out the window, but you should never take this shortcut when pheasant hunting.

You see, a badly mounted gun is going to give you a bad aim and make it less likely that you’ll hit your feathered target. And then it really has got away.

What you need to do, then, is increase the speed at which you can mount your gun against your cheek. Practice this process just before you head out into the field and, indeed, whenever you’ve got a spare five minutes. 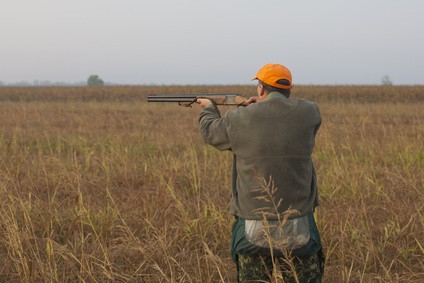 Pheasants are highly skilled in the air and can twist from one direction to another in the blink of an eye.

It’s this unpredictable movement which catches many hunters by surprise and leaves them off balance.

Now, an off balance hunter is pretty much the worst scenario you can imagine as your aim is also going to be off balance.

The best way to avoid this is by moving from the waist and keeping the gun at head height, no higher.

Many hunters also tend to shoot from the back foot, but this sets you up for toppling over. I’d advise you to spread your weight over both feet to keep balanced.

Shooting clays from a trap is a great way for newbie hunters to get to grips with shooting a moving target.

But you have to understand that an inanimate clay is going to act very differently to a live pheasant.

The biggest mistake that newbie hunters make is that they don’t adjust their senses to the acceleration of a pheasant. You see, a clay slows down as it leaves the trap, but pheasants don’t!

This is why you need to prepare yourself to be totally focused on the bird and its speed.

Using Too Much Choke

It’s a common mistake that the more choke you use the better. Many hunters are under the assumption that a fully packed choke gives you a better chance of bringing that bird to the ground.

However, in practice, a full choke produces ragged shot patterns that are going to be uneven and fail to hit the mark.

For the distance at which you’ll be shooting pheasants – between 20 to 40 yards – your best option is going to be for an improved cylinder choke which will give you clean patterns.

A full choke is only going to be an option if you’re shooting from ridiculous distances, but in my opinion these types of shot are a waste of ammo.

As you can see there are plenty of areas for you to improve on when pheasant hunting, so I hope this article has shown you where you’re going wrong. Let me know what you thought in the comments below.