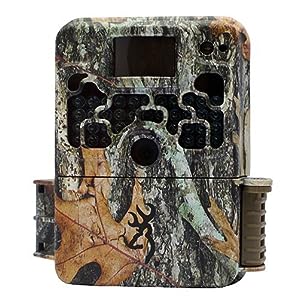 The Browning Strike Force Elite BTC5HDE is one of the most popular trail cameras on the market right now. It boasts a ton of useful features, and the fine folks at Browning have added upgrades to the BTC5HDE from previous models. This is a very affordable trail camera and it has very few drawbacks. Below, we’ll examine this model in detail to make it easier for trackers and hunters like yourself to determine if this is the right trail camera for you.

The Browning Strike Force Elite BTC5HDE comes equipped with a 10-megapixel camera to take crystal clear photos in full color. Rapid Fire Mode allows you to take up to six pictures in a single burst, with each photo being just 0.3 seconds apart.

Enabling video mode allows you to capture high-resolution, 1080×720 videos in color. This trail camera also records audio, meaning you can hear what you’re tracking in addition to seeing it clearly. This camera also has “smart” features, including a shut-down of video mode after four seconds of inactivity, thus allowing you to preserve battery life. The BTC5HDE can capture videos of between 5 seconds and 2 minutes during the day.

The BTC5HDE trail camera can detect and capture motion from up to 55 feet away. This allows you to see what’s happening on a trail without having to place the camera in an obvious spot. This model also has a 55-degree field of vision, which is higher than many other cameras and permits you to track movement at angles that other cameras might not be able to see.

Trigger speeds for the BTC5HDE have been upgraded over past editions of the Browning Strike Force Elite trail camera. The trigger speed for images is down to 0.65 seconds, while image recovery time is 1.3 seconds. The video trigger speed is approximately 1 second (depending on the lighting) and video recovery speed is 2.3 seconds.

Browning has fitted this trail camera with a 36-piece LED system to capture infrared photos and videos at night. Its 100-foot flash capability is second-to-none. The “zero blur” feature means you don’t have to worry about photos and videos taken at night coming out hazy. Thanks to the “smart video” feature you can capture useful videos at night without having to worry about your battery dying due to continuing use of the LEDs after movement has stopped.

This trail camera is compatible with SD (memory) cards of up to 16 megabytes. With this amount of storage you can capture 5,000+ images with the 10 megapixel camera, or over 4 hours of high-resolution video recordings. With this amount of storage space, you could easily go weeks or even months without having to switch out memory cards or download the files onto your computer. This trail camera is housed in a durable, waterproof, plastic composite. It’s one of the smallest trail cameras available today, meaning it’s easy to conceal. It comes standard with tree-patterned camouflage and can easily be mounted directly to a tree or placed in a protective lock box.

This camera has an external power jack, but if you decide to use 6 AA batteries to run the camera you can expect them to last for up to two months before they need to be recharged or replaced.

Overall, the Elite BTC5HDE is a solid choice for hunters and trackers alike. It combines state-of-the-art image and video capabilities with night vision, all in a compact device and at an affordable price. If you are looking for a trail camera that can pretty much do it all and not break the bank, we definitely recommend this model.