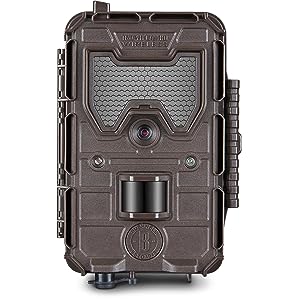 Hello hunters! It’s no secret that we live in a world where technology is continually improving over short spans of time in all areas, including trail cameras. That brings us to the Bushnell Trophy Cam HD Aggressor 14MP Wireless Trail Camera. Let’s jump right in, because this is a doozy.

The first thing that jumps out with this camera is its look. Just looking at it gives the impression that it is a beast, which it most certainly is. It’s stacked design makes it seem like a large walkie-talkie. It comes in an inconspicuous brown shade, making it suitable for stealth use.

The camera comes with no-glow LED lighting, making it invisible to game and other hunters. In the month I have used it, not a single person has noticed it. I’m sure of you can all relate with the annoyance of people removing or stealing cameras, so the nonplusing LED light is a big plus.

One of the most impressive aspects of this camera is its features. As someone who uses cloud storage for most of my pictures, hunting or otherwise, having my trail camera connected to it is huge. The camera does have an SD slot though for those who don’t use cloud storage or want a combination of both.

After setting up the camera, users can download an app that allows them to control the camera from wherever. The app is available on both the Apple App Store and Google Play, for free. With this app, you can send your images to a smartphone, email, and social media platforms like Facebook. Since you may not have wifi where you set it up, Bushnell offers prepaid 3G service plans. It may also be able to be added to your mobile provider.

The camera couldn’t be easier to set up. It’s ready to go right out of the box and both a SIM card and data card come included. It is worth noting, however, that the 3G service will only work for those of us in the US. All of these remote features have worked very well for me during my first month. I just pull out my smartphone at work and check how things are going on the app.

The pictures are what set this camera apart from the rest. The 14MP images are stunning, giving some of the most detailed intel I have ever seen. The video clarity is amazing as well. The videos are shot in 720hp HD, and the length of each video can be customized to last between one second and one minute. That range is definitely on the higher end of time compared to most cameras, as many tend to last 15-30 seconds, max.

As impressive as the night vision range is, the daytime range is even more so. The Hyper PIR motion sensor can pick up movement up to 60 yards away in most cases. That depends on what it is, though, I have had it trigger from a bear that was 80 yards away.

Like most game trail cameras, this one can be set to take pictures at certain intervals. It has an impressive time range; it can be configured to take pictures every second to every hour, and everything in between. What sets this camera apart from many others though is that it has two timeslot options, meaning you can have one interval set for dusk and one for dawn.

Unlike other trail cameras, you don’t have to choose between the motion sensor setting and the time interval setting. This camera will continue to take pictures at whatever rate you set it at as well as pick up anything that may walk past. I have been waiting for a camera to be able to do that for a very long time.

This camera is very durable, which is not a surprise considering the price on it. It is weatherproof, with the manufacturer stating that it can withstand wind, rain, snow, or whatever Mother Nature can throw at it. Its climate range is -5 degrees to 140 degrees. That’s easily the largest range I have come across yet. I don’t know where it gets above 140 degrees, but I’m glad I don’t live there.

As I’ve explained, this camera is a monster in every way. That requires a lot of power to operate. This one is on the higher spectrum, needing 12 AA batteries to keep it going. That’s a lot of juice. The battery life depends on how much you use it. I have been setting the intervals to take pictures every five minutes and having it last around ten hours. Obviously, it will last shorter or longer depending what setting you decide.

At the end of the day, this camera is worth the investment. It will set you back more than some others, but what you get for that investment is well worth it. The crystal clear images, the vast array of customizable settings, and the 3G compatibility set this camera apart from the rest. I’m sure I’m going to get a lot of great use out of this baby for a long time.