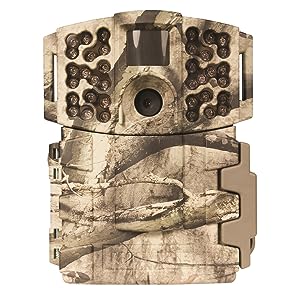 Being an avid bowhunter in the fall, I have had to set up a great deal of trail cameras to keep an eye on key spots for hunting. There are a wide range of options when choosing a camera – with companies like Bushnell, Stealth Cam, Moultrie, Primos, and many others fighting for a spot in the market, it’s hard to know which camera will be best to aid you in your hunt. You need a camera that will accurately capture how much activity any given area sees, help you decipher the movements of your target, and do it without requiring an inordinate amount of batteries. It can be hard to balance your needs with the perfect trail camera – and do it without paying an arm and a leg.

To start, here are some of the key features for the camera:

Since it was a new feature added to this camera, I set it up in “quick start” mode to see what it could do with minimal customization. The 2-inch color screen was massively helpful when aiming the camera at the trail – with a live preview of the exact view I was going to get, it was far less of a hassle putting it in the tree than some other cameras I’ve used. I stepped back to take a look at its appearance after setting it up – the Mossy Oak pattern on the casing blended in very well with the surroundings, and with the way that Moultrie has redesigned the LED arrangement in the front, it’s far less conspicuous than other trail cameras on the market (making it far less noticeable to wildlife and thieves). Some notes about set-up: The Moultrie M990i allows you to set a camera name, input the GPS coordinates of the camera manually, and choose between several different modes. I chose the hybrid mode, which is a combination of time-lapse mode and motion detect mode. In hybrid mode, when motion is detected (for this camera, at a 50-foot range), the camera enters time-lapse mode for the duration that it detects the motion. I felt for testing this product that choosing the hybrid mode would allow me to get a good sample of photos. You can also record video with sound (anywhere from five to 90 seconds), though there is no picture/video mode combination.

Now for the photos themselves! The photos include a recording of the moon phase, the time, the date, the temperature, and a barometer reading. The daytime photos have very little color distortion – in many trail cameras I’ve used, the vibrancy and colors seem to be a bit too bright or dull or tinted in some way, but the Moultrie M990i captures a very good image of its view without distorting the coloring too much and while being bright enough for you to really get a good look at what triggered the camera. While this isn’t hugely important for mapping the movements of animals, it was pleasant to discover that the daytime images were crystal-clear with minimal blur for moving animals. However, I was disappointed to discover that because of the slightly slower trigger speed than other cameras on the market, there were a few times when I only caught the tail-end of a deer.

The nighttime shots were definitely lower quality, though the LED array does in fact do what it’s supposed to and illuminate its target (all while being a no-glow camera). One suggestion I have (that many hunters have, in fact) is to set the camera up and then clear away any obstructions in the view. This way, when the flash goes off, it will illuminate the animal instead of leaves or branches or whatever else may be surrounding the view.The camera also gives you the option to turn on “Motion Freeze”, which will reduce the blur on images taken with the flash.

The range on this camera is a little lower than some of the other leading cameras out there – however, given its lower price point, and compared to others also being sold at this price, the advertised 70-foot flash range and 50-foot detection range is a fair trade for the money. I don’t feel as though I missed many events that were out of range, as the camera recorded quite a bit of activity where I set it up. With any type of time-lapse mode, however, this did consume more battery life than setting it up in motion detect mode, but the camera does seem to boast a low battery consumption, meaning that with the right settings, you could likely leave it in a tree for eight or nine months without having to change the batteries.

Overall, the Moultrie M990i is great for hunters looking to save a little bit of money but also buy a decent quality product. There are better trail cameras out there, but certainly for more money. If you’re looking for a camera that will allow you to track down your trophy buck for next hunting season, this one will definitely do the job.