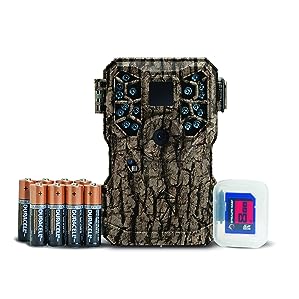 Hunting season is just around the corner. With another year of hunting about to start, that means new technology to try out. As you know, it’s important to have a solid trail cam in order to help make sure your outing is a success. Nobody wants to go out all day with nothing to show for it. That brings me to my newest find, the Stealth Cam STC-PX18CMO Trail Camera. Here’s what I’ve found out about it during my first month.

The first thing worth mentioning about this stealth camera is that it is indeed an impressively enigmatic camera. The camouflage and design of the camera are impeccable in my opinion. In fact, I have dropped it in fall foliage a couple of times in the past and had an arduous time finding it! It also makes no noise and does not overheat; significant things that often go overlooked. I haven’t had any human interference either.

Since I mentioned that I had dropped it a couple times, now is an excellent opportunity to discuss durability. It’s only been a little over a month since I’ve used it but so far there have been no issues. For how small it is (and light, coming in at 1.5lbs), the product is very enduring. So far it’s managed to resist my clumsiness, moderate wind gusts, and light rain without any issue.

So far it hasn’t been affected by the temperature outside, either. It can get up to 100 degrees in August where I live, and so far there have been no problems in the extreme heat. The paperwork says that there can be battery issues in weather over 110 degrees and in anything under -10. That’s pretty impressive range right there.

There is a manufacturer warranty with it in case it does succumb to the elements. This warranty helps put my mind at ease even further because you just never know what can happen out there. So, even though the camera hasn’t taken any damage yet and doesn’t show any signs of diminishing, there is nothing to worry about if it does eventually.

When it comes to the pictures themselves, they’re magnificent. There are four different settings including one video camera setting, though I find myself mostly sticking to 8MP. The 8MP setting is my favorite out of the four simply for how clear the images come out. That’s the camera enthusiast in me. Sometimes I don’t need crystal clear pictures, and that’s where the other three settings come into play.

While the other three settings aren’t customizable, they have different delays and burst per frames, so that is beneficial depending on what I need at the time. I don’t use the video camera setting often, but it seems to last about 10-15 seconds when I do. As the camera is GMS technology, the pictures can be checked from wherever so long as you have an accompanying accessory.

I have had no quandaries with the motion sensor as of now. It seems to work best at around 20-40 yards away, which for me is a good range. It is somewhat sensitive, too, but in the right ways. A good example of that is it only picks up little things when they get close to it. Rabbits and small game need to be closer to activate it than larger game like deer do. It’s also very useful for avoiding bad spots. No one wants to hunt in a place that will be interrupted by pedestrians or even bears.

The largest downside to this camera is the battery. It takes a whopping eight AA batteries to keep this bad boy running. I’m not an enthusiast of having to use disposable batteries I prefer things that work with a charger. So far it seems I usually get 7-9 hours of battery life per cycle. The lifespan may change depending on what type of batteries you put in it. I imagine the lifespan might be less using dollar store batteries.

Needing to change 8 AA’s can get very expensive, I’ve already learned that in the first month of owning this. Thankfully the first 8 AA’s are included with the camera. That was a huge positive for me, I admire when companies make gestures to their customers, and a lot of businesses just don’t bother to do that anymore. It may be fun to play around with the different settings and leave the camera running for an extended period at first, but after a while, it’s just too much in battery costs.

Images and recordings get stored on an SDHC flash card, which comes included in the camera. It can be quickly changed with a new one when full or if looking for something with more room overall. It really depends on how much you use it when it comes to how quickly it will fill. I haven’t been able to use it as much as I would like, but at the same time I’ve still gotten a lot of use out of it and haven’t come close to filling it up.

Along with the easy to change storage, the camera is very user-friendly overall. It took me almost no time for me to get it set up and any hunter who has used a tracking cam before should have no difficulties with it either. Even if this is your first one, the setup procedures are simple and don’t take much technological know. The one downside to this simplicity is that the camera isn’t very customizable in most settings.

Overall, the pros surpass the cons when it comes to this camera. It executes what it sets out to do, and it does it well. A shorter battery life and limited customization are a fair trade off for how well the camera itself works and for how tough it is.

You also can’t beat the price. There may be cheaper cameras out there, but the saying “you get what you pay for,” is certainly true. Investing in this camera (a small one all things considered) will end up saving me money since it is weather resistant and comes with a warranty.

I recommend this camera to anyone looking for an extra edge this upcoming hunting season. Get this baby set up and find out where those critters are at and have more successful hunts all season.