Hunting is an exhilarating, thrilling, tactical and useful sport, and conscientious hunters always remain aware and cautious about its risks. Below, we’ve broken the most important hunting safety tips into four categories to keep you safe year-round. 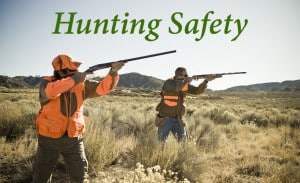 Hunting in the United States isn’t simply a matter of grabbing a gun and heading out to the woods. Hunting laws vary from state to state, and sometimes even at the county and city levels. Get answers to the following questions before planning a hunt:

Thousands of people are accidentally injured in hunting accidents each year. Hunters are typically very responsible because they recognize and respect the power that their weapons have. However, be responsible and take the following precautions before hunting:

Protecting Yourself & Other Hunters

Hunting safety doesn’t just mean you follow the minimum safety requirements established by law. It also means you take whatever common-sense precautions you can to protect yourself and other hunters. Here are a few tips to keep you and others safer the next time you go hunting:

Be the Predator, Not the Prey

There’s a famous scene in the original Jurassic Park movie where the park warden thinks he is hunting a raptor. Just before he takes his shot, however, he realizes that his target was acting as a distraction while another raptor snuck up on him. While this is an extreme example, it’s a reminder that each time we go hunting, we are stepping into a world where we aren’t always highest on the food chain.

Know what animals are present in the area in which you plan to hunt. Are there bears in the area? What about mountain lions? Coyotes, wolves and wild boars can be extremely dangerous to humans, especially if they feel threatened or provoked. You also need to be aware of poisonous snakes, spiders, ticks, ants, and mosquitoes. Any one of these creatures can ruin a hunt and cause extreme displeasure, or even death.

Due to the combination of weapons, nature and wild animals, there will always be an element of danger when it comes to hunting. By following the aforementioned hunting safety tips and using common sense, however, you can have a good time and gain peace of mind by knowing that you’re doing everything within your power to protect yourself and everyone around you.