While most game cameras these days feature many similar features, you’ll not often find a great wide angle perspective camera. Why is a wide-angle camera nice on the trail? When positioned properly, it can allow for some of the best shots of game and capture more than just what’s directly in front of the camera. This allows the wise hunter to scout what’s going on around the focal point of the camera for a better understanding of the game’s behavior. 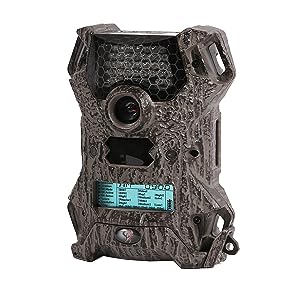 With an 8MP resolution and 70-foot infrared flash, this camera won’t win any awards for clarity. However, using an eye for robust features, WildGame included a frame-mounted cable lock attachment for theft prevention. The included strap isn’t theft proof but it will be enough to get the camera mounted up. You’ll have to feed the beast 8 AA batteries to keep it going but the water-resistant housing will provide long lasting protection for the internal electronics as you scout your hunting locations.

Utilizing 27 IR LEDs the camera is able to take photo and video up to 30 seconds at a time. You’ll have to shoot and store media on the 32GB SD card but that should provide plenty of storage for weeks of footage and photos. While it’s not necessarily cutting edge, the less than 1 second camera trigger speed should be sufficient when paired with the wide-angle lens.

This is a great choice for hunters and game experts seeking reconnaissance information in a small and easy to use package. While the features aren’t particularly cutting edge, the wide-angle lens and cable locking housing make up for any lacking. Choose this camera as an entry level game camera on any property. You may want to pick up an aftermarket cable lock to keep your investment safe on the trail.

Let’s see how the Vision 8 TruBark stacks up against the competition:

Wildgame has got the Crenova beat, however, when it comes to memory storage space. Crenova only managed to pack in 16GB worth of SD storage which is half the storage of the Vision 8. If you’re looking to be able to store a ton of photos, then the Vision 8 is the clear winner.

With a .6 second trigger speed, the Distianert trail camera is 66% faster than the Vision 8 and boasts a zero second delay between triggers for still shots. With the capacity to record 12MP photos and 1080p video, the 32GB capacity of both the Distianert and the Vision 8 will stay on par with one another. Of course, when it comes down to it, the lower resolution images of the Vision 8 will allow that camera to store a relatively larger volume of photos and videos.

With a range of features such as time-lapse, adjustable trigger interval, and adjustable video quality settings, you’ll have full control over your trail camera with the Distianert. Overall, probably a slightly more robust and featureful choice for the experience camera user.

With only 26 IR LEDs, the Vision 8 camera has got this one beat out by a small margin. Their comparable 8MP photo resolution is on par, though the APEMEN specifies an impressive 1080p video recording. APEMEN, you get a slight edge on this one.

With a comparable trigger speed of, “less than one second,” these cameras are neck-in-neck for technical quality and reliability. They’re also both operated by hefty 8xAA batteries so there’s no divergence for comparison there, either.